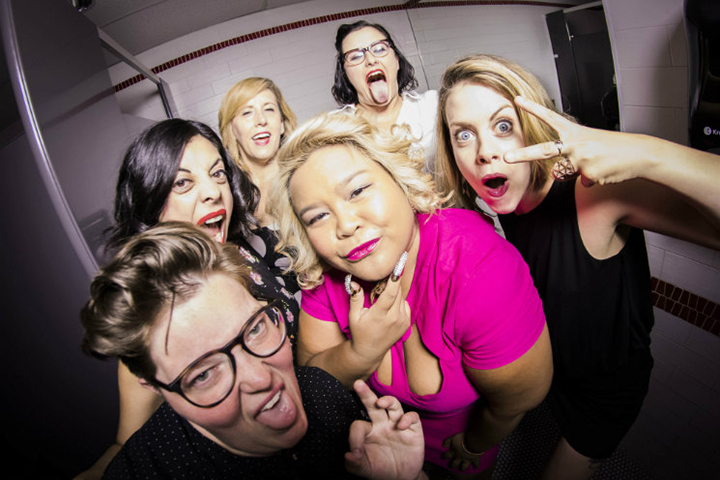 Pop Goes The News – She The People, one of the most anticipated shows at this year’s Just For Laughs festival, opened Monday night at the Centaur Theatre in Old Montreal.

It features sketches previously performed at Second City in Toronto and Chicago but has been customized for a Montreal audience with references to Laval, Pointe-Claire and Quebec’s controversial Bill 21.

As the name suggests, She The People is a show by and about women that alternates between poking fun at the portrayal of women in pop culture (why do maxi-pads commercials use Windex?) and tackling serious issues with metaphors (you’ll never look at a Lean Cuisine the same way).

Thankfully, She The People doesn’t spend too much time on politics, although Doug Ford, Andrew Sheer, Donald Trump and Justin Trudeau get mentions. (Margaret Trudeau was in the audience on opening night.)

Some of the sketches are LOL funny, some rely a bit too much on sight gags (here’s looking at you, T-Rex), and some come off as filler – but they’re all slickly performed by the extraordinary talented Ashley Comeau, Paloma Nuñez, Karen Parker, Kirsten Rasmussen and scene-stealers Tricia Black and Ann Pornel.

There are several funny musical numbers, although it’s occasionally difficult to make out the words. There’s a clever song about sexual orientation that involves some unique crowd surfing and a good one in which the women share their reasons for crying.

The show also has some interaction with audience members, mostly involving those unlucky enough to sit in the front row.

She The People makes a great girls night out but it’s also a fun time for husbands and boyfriends… and anyone, frankly, who understands who runs the world.

She The People runs at Centaur Theatre until July 27. For tickets and info go to hahaha.com.