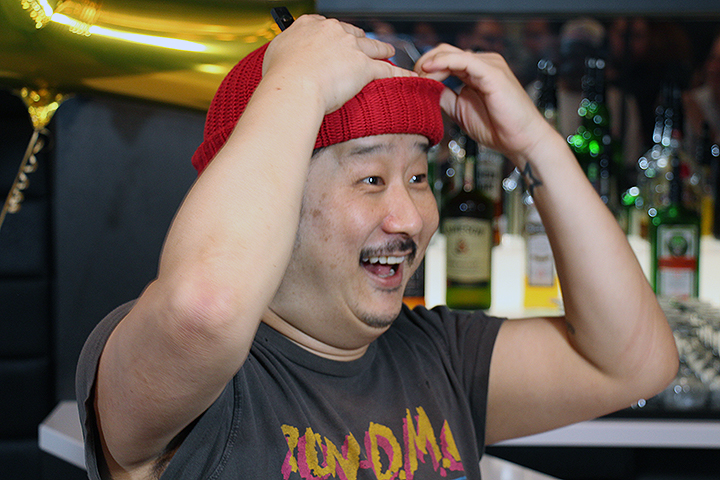 Pop Goes The News – Bobby Lee is making his debut at Montreal’s Just For Laughs comedy festival as host of one of its most popular shows, The Nasty Show.

“I’ve never been to Montreal before,” Lee told Pop Goes The News, adding that he’s performed in several other Canadian cities over the years. “I love Canadians so much. You guys are non-threatening, although you do have some crazy people up here.

“There’s a Chinese guy who ate a guy on a Greyhound bus. Remember that guy? I don’t like that guy.” (He’s referring to Vince Li, who beheaded and cannibalized 22-year-old Tim McLean on a Greyhound bus in July 2008.)

If that offends you, you’re not the target audience for The Nasty Show.

Taking the hosting gig was a no-brainer for the outspoken comic and podcast host.

“It’s in my wheelhouse,” said Lee. “I also asked who else is on it, and the right people are on it… people I know. It just completely makes sense for me.”

The show features returning champion Big Jay Oakerson as well as Andrew Schulz, Jessimae Peluso, Chris ‘Comedian CP’ Powell and Bonnie McFarlane. There are jokes about people with mental disabilities and plenty of talk about vaginas and penises.

At Thursday night’s show, Lee was an effective and energetic host. He warmed up the crowd and then kept things going. (He repeatedly introduced comics by saying “you’ve seen them on Comedy Central” even though the network isn’t available in Canada.)

Powell got some laughs but his material probably goes over better in Bible-thumping America. Peluso’s biggest laughs came from her physical comedy.

McFarlane had a zinger about how Just For Laughs pays its female comics the same as its male comics. “I don’t know if that’s true,” she said, adding that she was forced to say so under threat of rape.

Oakerson rehashed a tale about using the R-word that he did at a previous edition of The Nasty Show but had some funny thoughts on the abundance of uncircumcised men in Montreal. He ended his set with a pledge to ejaculate on every surface in his room at the festival’s official hotel because of its daily WiFi charge.

The highlight of this year’s Nasty Show is Andrew Schulz, who had many people on their feet after a set in which he took on abortion, female circumcision and the differences between male and female orgasms. Schulz is a strong writer with solid timing and deserves a bigger spotlight at next year’s JFL.

In today’s culture of faux outrage, heightened sensitivities and hashtag protests, The Nasty Show is a refreshing night of “locker room talk” and honest, offensive comedy that gives us license to laugh at ourselves and each other.

The Nasty Show runs until July 27 at MTelus as part of Just For Laughs.