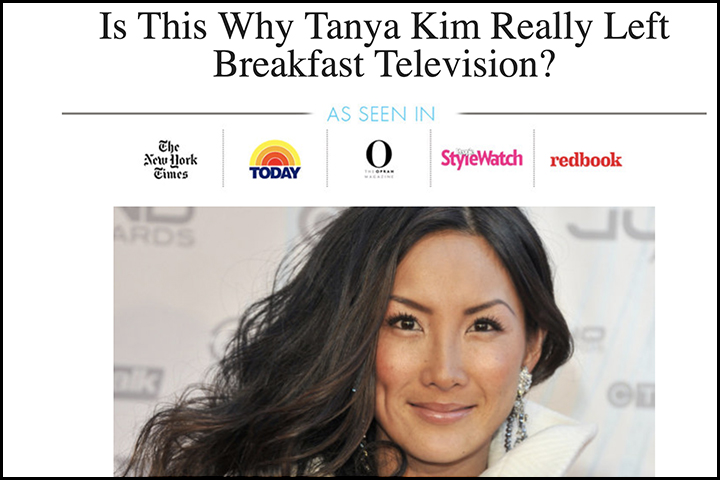 Pop Goes The News — Two former Canadian TV personalities are fighting back against online “articles” that are using their names and images to sell skin care products.

The faux articles appear with click-bait headlines like “Is This Why Tanya Kim Really Left Breakfast Television?” and include bogus testimonials from Fromer, Jeanne Beker, Tracy Moore, Dina Pugliese and Jennifer Valentyne.

The articles are posted on a website for the non-existent Entertainment Today Inside News that uses the E! News domain eonline.com – but with “-show.live” attached.

The domain linked to in the articles, registered through L.A.-based NameCheap Inc., is owned by a company that uses an address inside the Le Méridien St. Julians Hotel & Spa in Malta. The products sold are shipped from a distribution warehouse in a Mississauga, Ont. industrial park.

“Not only do these articles and tweets promote incorrect and untrue information about me and my career, but they’re also ILLEGALLY using my name, face, and brand to scam people for their own greedy purposes,” Kim wrote on Instagram.

“I DO NOT in any way endorse Essence of Argan products or any of the other ‘brand names’ that these products have been marketed under such as; Vita Silk, Pink Diamond, Luma Glow, Oveeno Skin Care, and Idrotherapy (to name a few!?!).”

Consumers ordering the products typically find themselves getting billed for monthly deliveries.

Kim said she has tried to get the articles taken down. “The only thing I can do right now,” she said, “is repeatedly post on my social media channels warning you all that this is a SCAM.”

Fromer called the ads “a complete scam” and said they include “a fake quote attributed to me for a product I’ve never used.”

She is featured in one article as raving: “Tanya gave me a sample of Essence Of Argan and the product is a miracle worker.” (Earlier this month on Twitter, Fromer said: “Never used it; never said it.”)

The company has previously promoted the product using a fake article that claimed entrepreneurs on CBC’s Dragons Den invested in the product. Arlene Dickinson told Marketplace: “It was horrible. To use my image and to lure people in, it is just reprehensible.”