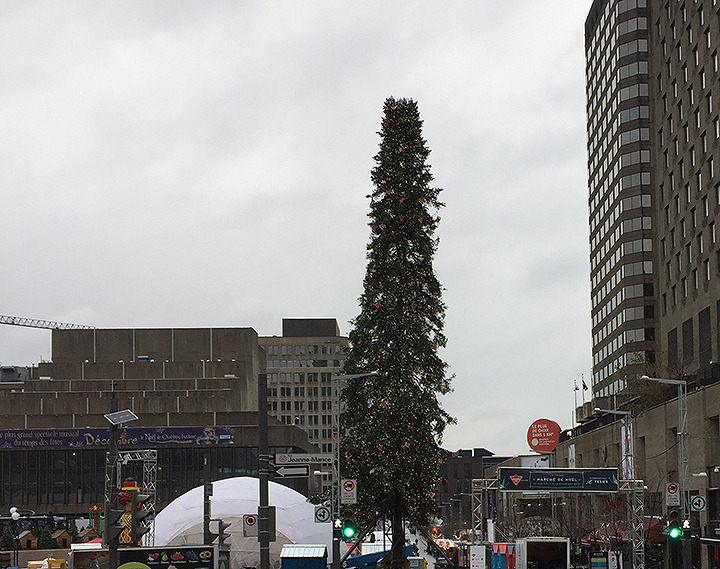 Pop Goes The News — The fir is flying this holiday season over who has Canada’s tallest Christmas tree.

In Montréal, organizers of the Grand Christmas Market in the heart of downtown set out to display “North America’s tallest Christmas tree,” according to the Montreal Gazette.

What they got, however, is one that tops out at only 88 feet, according to spokesperson Marie-Christine Champagne.

MTL Blog, not exactly known for accuracy, posted a story with the headline: “Downtown Montreal Is Now Home To Canada’s Tallest Christmas Tree.”

In the post, writer Jeremy Hazan said it is “supposed to be the biggest Christmas tree in the country.”

It’s definitely not the biggest. Many passersby are noticing that the tree — which is adorned with Canadian Tire logos — looks skinny and sickly.

“It looks like a giant Charlie Brown Christmas tree,” said one young woman who snapped a photo of the tree on Thursday.

Canada’s tallest (and biggest) Christmas tree is, in fact, about 600 km southwest of Montreal.

Inside the Toronto Eaton Centre this year is a shimmering 108-foot Christmas tree.

Prior to its unveiling on Nov. 24, mall owner Cadillac Fairview promoted it only as “Toronto’s tallest Christmas tree.”

But, blogTO and the Toronto Sun gave the tree the title of “Canada’s biggest” or “Canada’s largest” respectively.

Sticklers for detail point out the Eaton Centre tree is man-made and therefore can’t be compared to Montreal’s real evergreen. Similarly, the world’s tallest Christmas tree — standing 137 feet in Mexico City — is made up of several trees.

Still, there are a few real Christmas trees in cities throughout North America that are taller than Montreal’s.

The most famous one, located at Rockefeller Center in New York City, stands 94 feet this year. The Norway spruce, estimated to be as much as 95 years old, is decorated with 50,000 lights.

There’s also a 100-foot Christmas trees in Glendale, California and a 90-footer in Newport Beach.