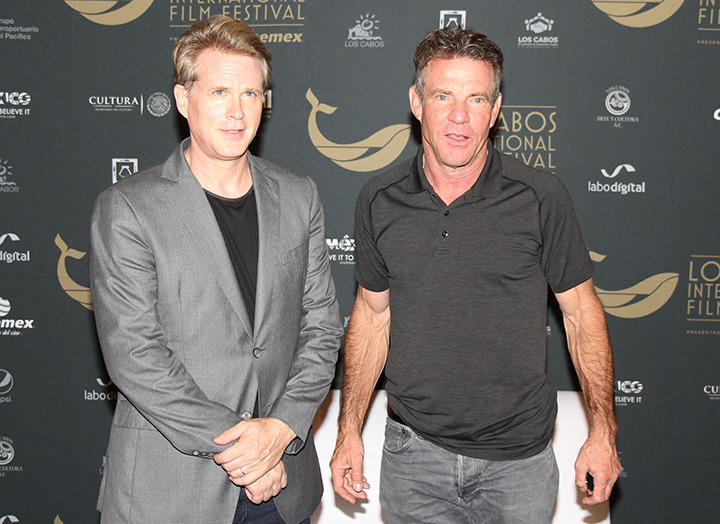 Pop Goes The News — Actors Cary Elwes and Dennis Quaid sang the praises of Montreal on Thursday while promoting their series The Art of More in Mexico.

The Crackle drama, which also stars Christian Cooke and Kate Bosworth, is filmed in the Canadian city. Season 2 wrapped up in August.

“Montreal is a fantastic city to shoot in,” Quaid told Pop Goes The News. “From May to August, especially.

(Among the people Quaid is referring to is Santa Auzina, 30, whom Quaid, 62, met in Montreal and is currently dating.)

Quaid said Old Montreal, where a lot of the series is filmed, reminds him of Europe.

Elwes agreed. “It does remind you of Paris a little bit,” he said. “It’s very pretty.”

While Quaid has worked in Montreal previously — notably on the 2004 film The Day After Tomorrow — The Art of More is Elwes’ first job there.

“The people of Montreal have opened up their arms to us and welcomed us in ways that we couldn’t have hoped for,” he said. “It’s a beautiful city. It’s gorgeous.”

MORE: Was Donald Trump inspired by Dennis Quaid in The Art of More?

The Art of More is primarily set in New York City but shooting in Montreal makes sense for its producers.

“It’s always about the money,” said Quaid, who is an executive producer of the series. “It’s tax rebates, exchange rate, and what kind of deals they can make with that. It’s a good deal for everybody.”

The first episode of Season 1 was screened at the Los Cabos International Film Festival because the series is debuting in Latin America. Season 2 is available in the U.S. beginning Nov. 16.

Quaid and Elwes both said they enjoy making entertainment for a streaming platform.

“It’s a brand new world. It’s a very exciting world that it’s opened up,” said Quaid of services like Crackle, Amazon and Netflix.

“A lot of new content. A lot of new type of stories that usually don’t get told on network television because they’re quirky and not right down the middle. I prefer the Crackle world right now. It’s more fun for us. A lot of exciting stuff.”

MORE: Cary Elwes at work on season 2 of The Art of More

Elwes predicted the death of network television because streaming services “provide a chance for viewers a watch shows at any hour, all at once or episode by episode, whatever they want to do, with no commercial interruption.”

Acknowledging that The Art of More has commercial breaks, he said “consumers on the whole prefer to watch television without commercials or as few as possible and that’s why I feel we’re entering a new era now with streaming networks that will signal the end of network television as we know it, probably in about 20 years or less.”

Will they be back in Montreal to make a third season?

Elwes replied: “From your lips to God’s ears!”