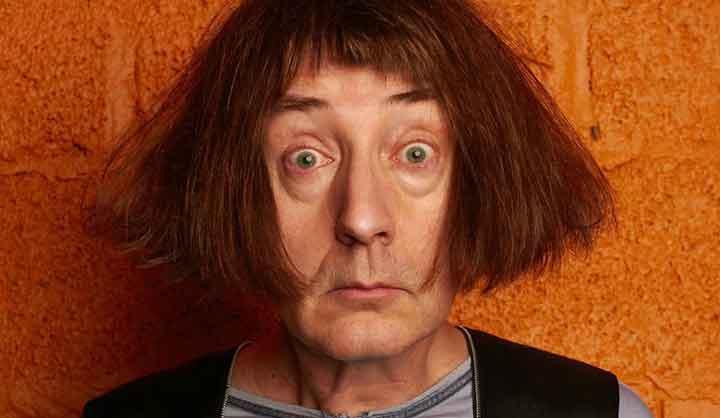 Pop Goes The News — A sense of humour goes a long way in Montreal, where people live with crumbling infrastructure, a struggling economy, and a landscape dominated by orange construction signs and barricades.

Once a year, things get a lot funnier in the city thanks to Just For Laughs (JFL). Founded in 1983, the comedy festival attracts top-tier talent from around the world. It’s more than live performances at venues throughout the city — it’s a street party that takes over the city’s Quartier des Spectacles.

Pop Goes The News has compiled a list of 10 show you need to see at this year’s JFL.

Philips is a stand-up veteran — he played JFL in its early days when the galas were held at Theatre St. Denis — with a distinctive delivery. Is he playing a character or is he really that weird? Either way, Philips is hysterical. Tweeting about his JFL appearances, he advised fans: “my act will be almost entirely in English, as usual.” On Canada Day, Philips tweeted a photo of himself in Cambodia — “the closest alphabetically I had.” You simply have to see this comedic genius in person.

Hassan, who describes himself as “half Pakistani, half frightened to admit I’m Pakistani,” first performed at JFL in 2012. The host of CBC Radio’s Laugh Out Loud, he may also be familiar for memorable roles in films like Goon and the TV series Man Seeking Woman. Hassan’s four kids are a big part of his comedy act and this show deals, in part, with how he handled their questions about religion and Islam. The word “Muslim” and laughter don’t typically go together these days so this is a show worth checking out.

If you only know Green for his sophomoric gags on television and the critically-panned 2001 film Freddy Got Fingered, you will either be disappointed or pleasantly surprised by his stand-up act. His March show in Laval was noticeably missing his gross-out schtick but filled with funny, thoughtful material. Green, who turns 45 on the night of his final JFL show, has grown up and proven himself to be a great comedian.

This show stars a pair of New York’s finest thespians, Gil Faizon and George St. Geegland. Never heard of them? That’s because they are characters portrayed by Nick Kroll and John Mulaney. These two opinionated 70-something New York bachelors are “hilarious” — according to both Amy Schumer and The New York Times. After playing off-Broadway, Kroll and Mulaney bring Oh, Hello to JFL ahead of their Sept. 23 to Jan. 8 run at Broadway’s Lyceum Theatre.

This British comedy star performs in front of thousands of people on the other side of the pond. At JFL, he’ll entertain fewer than a couple of hundred a night. This is a great chance to see the host of Chatty Man up close and personal. Read his interview here.

Bamford is a pro at making us laugh about family dysfunction and depression, typically by acting out different characters on stage. The star of Lady Dynamite on Netflix (she’s also been on Louie and the reboot of Arrested Development) is being honoured as Breakout Comedy Star of the Year at the JFL Awards on July 29. Now’s your chance to see her before she’s a big, big star.

This 18+ show runs nightly in one Montreal’s infamous strip clubs. It’s a fitting venue for Thune, who promises to tell “intimate stories from his life” without the guitar he’s usually playing while delivering zingers. If you love his Netflix special or his Tonight Show appearance, you know how cool Thune is.

Canadians are funny. This show gives you a chance to catch the next generation of Canuck comedians — the folks who may be headlining a JFL show in a few years. Hosted by the fabulous Scott Thompson, this showcase introduces you to Nigel Grinstead, Mike Rita, Keith Pedro, Chris Robinson, Mayce Galoni, Sophie Buddle, Ryan Dillon, Chantel Marostica, Jordan Chyzowski and Daniel Carin.

Thomas Leblanc loves Canada’s queen of melodramatic ballads. Tranna Wintour does not. Last April they faced off in this clever combination of music, drag, comedy and burlesque. Now they’re back at the Wiggle Room for three performances of their bilingual look at the life and career of Celine Dion. The hearty laughter will go on.

Last December, Stelling made headlines when she publicly accused her ex-boyfriend, comedian Cale Hartmann, of raping and abusing her. (He responded by calling the allegations “false and extremely harmful.”) No laughing matter for a woman named one of the Comics to Watch in 2016 by Time Out Magazine. You may have seen her on Conan, Chelsea Lately or Jimmy Kimmel Live — now see her at JFL.

For more information and tickets, go to hahaha.com