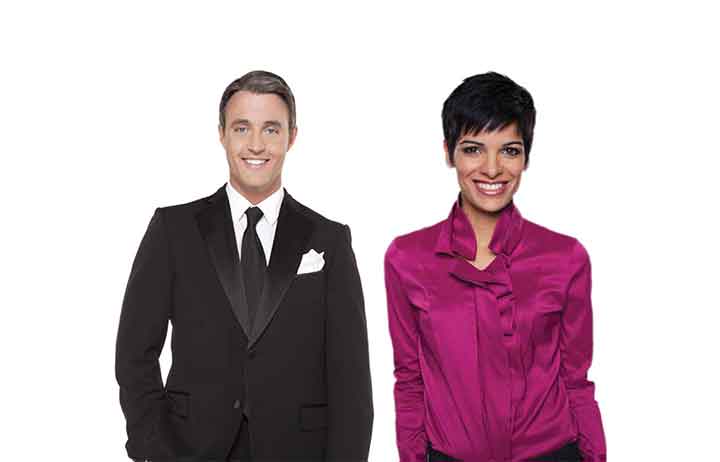 UPDATE: CTV confirmed on June 6 that Ben Mulroney and Anne-Marie Mediwake will co-host the new show and that it will be produced at its downtown Toronto location. Titled Your Morning, the show will also feature Melissa Grelo, Lindsey Deluce, and Kelsey McEwen.

Pop Goes The News — CTV announced Thursday that Canada AM will end on Friday and be replaced this fall by a new morning show.

According to sources, the reboot will be co-hosted by Ben Mulroney and Anne-Marie Mediwake.

CTV has only said it will announce the new show next week. In the meantime, programming from CTV News Network will air in the 6 a.m. to 9 a.m. Canada AM time slot.

Wow…so sad to see @CTVCanadaAM signing off. It was an institution.

“We are incredibly thankful to our viewers from coast-to-coast-to-coast who have been with us on this journey and a heartfelt part of our TV family all these years,” the three hosts said in a joint statement.

“We are extremely proud of Canada AM. It has been our privilege to be part of this historic Canadian series that brought us the opportunity to work with such an incredible team.”

For many years, Canada AM only aired nationally on CTV News Network because stations in Western Canada and in Ottawa had locally-produced shows, CTV Morning Live.

Details of the new show are being kept under wraps until the network’s UpFront presentation to advertisers on June 8.

Sources say unlike Canada AM — which was produced at CTV’s studio on the eastern edge of Toronto — the new show will originate from the downtown Toronto building where shows like The Social and Marilyn Denis Show are made.

Bell Media’s Randy Lennox said in a statement: “We look forward to building upon the success of Canada AM as we move forward.”

Mulroney, the Montreal-born son of former prime minister Brian Mulroney, has been a CTV fixture for more than a decade.

He worked at the short-lived Talk! channel, reported for Canada AM, and hosted Canadian Idol — but is best known for co-hosting CTV’s daily entertainment show, eTalk.

The 40-year-old and his fashion stylist wife Jessica Brownstein are parents of 5-year-old twins Brian and John and daughter Isabel, who turns 3 on June 12.

Mediwake started her TV career in Alberta — where her family immigrated from Sri Lanka — and moved to Toronto to report for CTV News and co-host the youth-oriented current affairs show 21C.

She took an anchor job at Global News in Toronto before moving to CBC News Network, where she anchored the morning show for about a year.

In October 2010, she was named co-anchor (with Dwight Drummond) of the CBC Toronto News — a job she left in late-April. At the time, CBC News said she was “leaving for another opportunity.”

Mediwake is married to Darryl Konynenbelt, a former journalist who is currently a senior consultant and media lead at public relations firm Navigator. The two are parents of triplets Annabel, Libby, and Maxim — who celebrate their 9th birthday on June 14.

FLASHBACK: Pop Goes The News broke the news about Amazing Race Canada in 2012!

Rogers-owned City airs locally-produced versions of Breakfast Television (BT) in Toronto, Montreal, Calgary, and Vancouver. The franchise was launched in 1989.

Global, owned by Corus, has local morning shows in Western markets but, in other cities, combines local news with content broadcast from Toronto. There is also a 30-minute national show that airs at 9 a.m.

Farewell @CTVCanadaAM. Some of the best interviews and biggest belly laughs of my career.

Sitting in as co-host of @CTVCanadaAM on few occasions was a career highlight for a kid who grew up with Norm Perry & Helen Hutchinson.

To my friends and good people at Canada AM thanks for the years of stellar work. Morning TV is one of the hardest gigs in all media.

Sad day for Journalism with the cancellation of CTV's CanadaAM. It served Cdns for decades. Telling imprt stories like the Fort Mac fire.

When my Dad was a guest on Canada AM in the late 1970s, he got this cool mug that now sits on my desk. #RIPCanadaAM pic.twitter.com/i6Z3Loyrlk