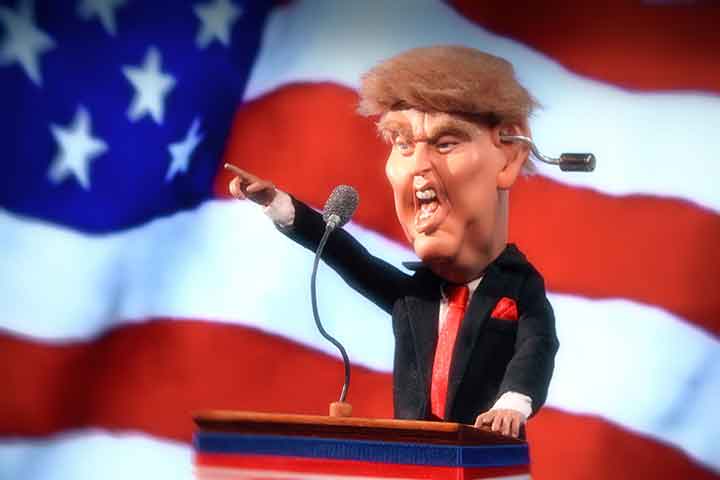 Pop Goes The News — A team of Canadian animators is revealing what’s really going on in the mind of presumptive Republican presidential candidate Donald Trump.

Trump Unhinged is a series of short — very short — films that will be released every day during the month of June.

“It’s our surreal take on what is going on inside The Donald’s head,” explains Adam Shaheen, executive producer at Toronto’s Cuppa Coffee Studios, in a release.

“We cover all the favourite and newsworthy Trump moments, adding our own amusing, animated take on the issues from this rather offbeat political season.”

Each stop-motion video begins with a caricature of Donald Trump “flipping his lid.” Among the discoveries in his cranium are an anvil-flattened monkey, a sun-burnt troll, a golden turd, and a whole lot of blue jelly beans.

BELOW: Watch a Trump Unhinged

Trump Unhinged was created by nine artists who worked on the project for over a month and shot more than 4,000 frames.

“We’re mimicking the insanity with our own brand of the ridiculous,” adds creative director Chris Morris.

Cuppa Coffee, which bills itself as the world’s largest stop-motion animation studio, made headlines in 2013 with Fordtacular Spectacular — a hilarious look at the antics of Toronto’s then-mayor Rob Ford.

A new Trump Unhinged will be revealed daily at trumpunhinged.com as well as on Twitter and Facebook.

BELOW: Watch a Trump Unhinged