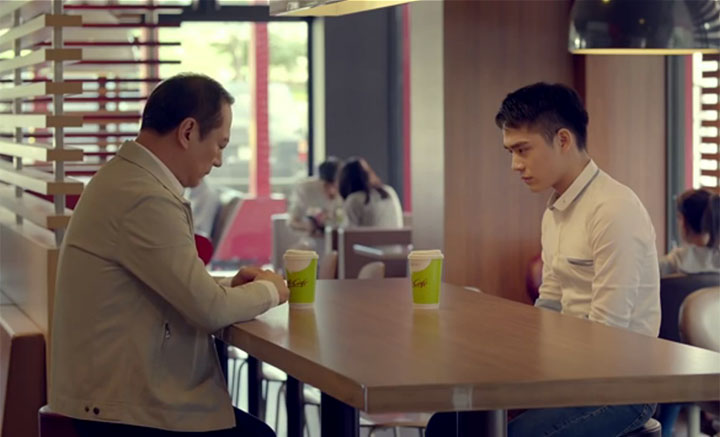 Pop Goes The News — McDonald’s has brewed itself a little controversy with a commercial showing a young man coming out as gay to his father.

The 90-second video for McCafé, the third in the chain’s “More Warmth in Conversations” series, has sparked calls for a boycott in Taiwan.

In the commercial, a young man shows his father a McCafé cup with “I like boys” written across it. The father appears to slam his hands on the table before he walks away — but he returns to the table, picks up a pen, and modifies the writing on the cup to say “I accept that you like boys.”

The young man reacts with relief as his father gives him a smile.

But the Alliance of Taiwan Religious Groups for the Protection of Family is outraged.

“Because McDonald’s is frequented by many children, it is especially important to oppose the promotion of same-sex behaviour,” reads a statement from spokesperson Chang Shou-yi.

“The Alliance opposes all advertising that miseducates children on sexual behaviour and rebukes and boycotts all enterprises that are polluting the next generation.”

A spokesperson for the agency behind the ad has said McDonald’s was prepared for criticism and welcomed dialogue.

A recent poll found 71 per cent of Taiwan citizens are in favour of equal marriage rights and the government is currently drafting legislation allowing for same-sex partnerships.

In 2010, McCafé came under fire from religious groups for a commercial in France showing a teenaged boy pining for a classmate at his all-boys school.