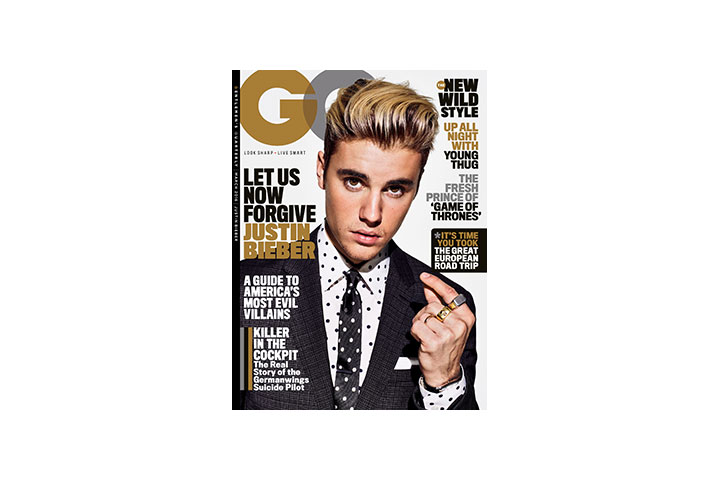 Pop Goes The News — Canadian pop star Justin Bieber appears on the cover of the March issue of GQ.

Inside the magazine, the Ontario-born singer also appears in several pages modelling clothing and showing off his upper body tattoos.

Bieber, who turns 22 on March 1, spent time with writer Caity Weaver in Los Angeles and New York for the GQ story.

Here are a few things we learned about Bieber from the interview:

• The single “Sorry” was not his way of apologizing publicly for bad behaviour in recent years. “It really had nothing to do with that. No. It was about a girl,” Bieber said.

• He actually doesn’t feel a need to apologize for his public missteps. “If I could go back, I wouldn’t really change much. I think it’s all my journey. That stuff made me who I am.”

• Bieber has been living in a Beverly Hills hotel for two years. (GQ doesn’t identify it as the Montage.)

• He “violates backchannel norms,” according to the reporter. Weaver described the singer as “not easy to talk to” because he doesn’t do the things most people do to indicate they are listening and engaged in a conversation. “It is unsettling,” she wrote.

• Bieber is a believer. “I feel like that’s why I have a relationship with Him, because I need it. I suck by myself,” he explained. “It just gives me some sort of hope and something to grasp onto.”

• Bieber knew he shouldn’t have brought his monkey OG Mally to Germany. (The primate was seized by authorities there in 2013.) He explained: “Honestly, everyone told me not to bring the monkey. Everybody. I was like, ‘It’s gonna be fine, guys!’ It was the farthest thing from fine.”

• He hopes to get a new monkey someday. “Monkeys are awesome,” said Bieber.

• Bieber was on Adderall for, he claims, about a year. “I’m not getting restful sleep, so during the day I need [Adderall] to concentrate.”

• He has five cars and several more on the way, including a limited-production LaFerrari.

• Bieber doesn’t send text messages and hardly uses his phone. His number is changed every six months for security reasons. “I don’t want people to feel like they can just get in contact with me that easy.”

• He is in no rush to get married. “I don’t want to put anyone in a position where they feel like I’m only theirs, only to be hurt in the end,” he explained. “Right now in my life, I don’t want to be held down by anything.”

• Bieber says his break-up from Selena Gomez was bad but the two are “good” now. “If she needs something, I’m there for her. If I need something, she’s there for me.”

• He has a tattoo of Gomez on his left forearm. “I kinda try to cover her face up with some shading,” said Bieber. His favourite tattoo is the pair of wings on the back of his neck, which he said took nearly four hours to complete. And Bieber says he won’t be getting one on his lower back. “Can’t really say I feel lower back tattoos on a male or a female,” he explains. “I think David Beckham has a tramp stamp and that’s no good.”

• Bieber and his mom Pattie Mallette had a falling out in 2014 and stopped speaking to each other. He says they have reconciled but he doesn’t see his mom (who lives in Kauai) “as much as I’d like to.” Still, he has several reminders of her inked on his body. Bieber has a tattoo of her eye on the inside of his left elbow and her birth year in Roman numerals on his right clavicle — albeit incorrect since 1975 is actually MCMLXXV, not “I IX VII V.”