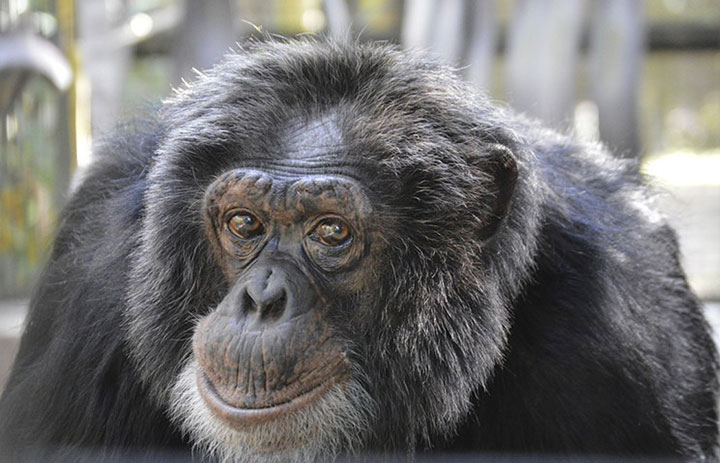 Pop Goes The News —Where do the charming chimpanzees and loveable orangutans seen in films and on television go after their short careers in front of cameras?

A few lucky ones end up retiring to the Center for Great Apes in Wauchula, southwest of Orlando, Florida.

Opened in 1997 by Patti Ragan, it currently offers more than 40 hectares of habitat and facilities for 28 chimpanzees and 15 orangutans. (In nature, chimps and orangutans do not live together — chimps are African and orangutans are Asian.)

Many of the animals were ripped away from their mothers as babies, raised in captivity and trained to perform tricks for the amusement of humans. Before they reached their teens they were too strong and dangerous to be around people.

Typically, they end up sold to research facilities or roadside attractions.

Chimpanzees can live up to 50 years and orangutans often make it 45 years, so caring for the animals is a long-term commitment. The Center relies on donations and memberships to stay afloat (it costs about $20,000 USD per year to care for each ape).

Here’s a look at eight of the Center’s most famous residents:

Bubbles is arguably the world’s most famous chimpanzee thanks to a childhood spent with Michael Jackson. Born in a Texas biomedical lab, he was taken as an infant from his mother and sold to Hollywood trainer Bob Dunn. Bubbles toured the world as Jackson’s sidekick and appeared on television and in music videos.

Bubbles, now in his early 30s and weighing 185 pounds, has been living for 11 years at the Center for Great Apes, where he likes to paint.

Ripley spent years working in Hollywood, including in 1995’s Ace Ventura: When Nature Calls opposite Canada’s Jim Carrey and in a 2005 episode of Seinfeld in scenes with Kramer (Michael Richards).

When he became too big, Ripley was moved to a small unaccredited zoo in Nebraska and then to breeders in Missouri and California. Now 26, he lives at the Center for Great Apes, where he was reunited with two sisters and his brother.

On Seinfeld, Ripley was repeatedly called a “monkey” by Kramer. Chimpanzees are apes, not monkeys.

Born in 1996 at a wildlife park in Oklahoma, Jonah was pulled from his mother and sold to a trainer in California. He appeared in a number of TV shows, commercials and movies — including opposite Mark Wahlberg in 2001’s Planet of the Apes (he shared the role of Pericles with his twin brother Jacob).

Jonah and Jacob were retired from show business at eight years old and have been in the care of the Center for Great Apes since 2004.

BamBam, a 16-year-old orangutan, was born at a commercial breeder in Florida and sold to a trainer in California to work in entertainment. He spent three seasons portraying Nurse Precious on the daytime drama series Passions. By the age of six, he was too strong to work with humans, so he retired to the Center for Great Apes, where he hangs out with Tango.

Tango spent the first seven years of her life working in TV shows, commercials and films. She is best known for starring as Suzanne in 2001’s Jay and Silent Bob Strike Back (in which she is repeatedly referred to as a “monkey” even though orangutans are apes, not monkeys) and as the face of Tang drink mix. Now 20, she spends most of her time at the Center for Great Apes with BamBam.

Mowgli had just filmed scenes with Tim Allen for the movie The Shaggy Dog when he arrived at the Center for Great Apes in 2005. He also appeared on TV’s Monk and the Dennis Miller Show. He’s now 16.

Sammy had several movie credits as a young orangutan, including 1994’s The Flintstones, but was most famous for having the lead role in 1996’s Dunston Checks In. He retired in 2004 to the Center for Great Apes with his companion Geri (who also worked in Hollywood) and their son Jam.

Popi the orangutan was born at a research facility in Atlanta and sold as an infant to a trainer who put her in show business. She played the girlfriend of Clyde in 1978’s Every Which Way But Loose and 1980’s Any Which Way You Can and starred opposite Tony Danza and Danny DeVito in the 1981 comedy Going Ape.

Popi found herself at the centre of a high profile animal welfare lawsuit after her trainer was accused of hitting her and other orangutans backstage at Las Vegas’ Stardust Hotel, where they performed in a nightly show.

She eventually retired to a facility in Iowa in 2008 and then transferred to the Center for Great Apes in 2012. Popi is now 44.