Pop Goes The News — Groundbreaking actress Laverne Cox is dating a Canadian man, according to a report.

The Orange is the New Black star and Vancouver native Jono Freedrix got tongues wagging last Saturday when they were seen getting cozy at the Screen Actors Guild Awards.

Cox and Freedrix have been friends — or more than friends — for some time. Photos of the two together as far back as 2014 can be seen on his Instagram page.

Last June, Cox posed with Freedrix at The Lower East Side Film Festival in Vancouver. 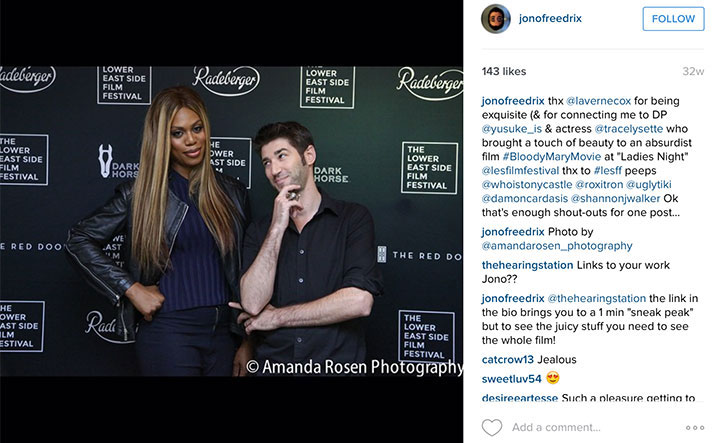 While neither has commented publicly, US Weekly reported Monday that Cox and Freedrix were seen “packing on the PDA at the Weinstein Company/Netflix SAG Awards afterparty at Sunset Tower Hotel in West Hollywood.”

The magazine reported “Cox wasn’t shy about getting close to her beau” and “spent the evening dancing with and kissing Freedrix.”

Media outlets were quick to pick up on the Us Weekly story. A headline at Hollywood Life reads: “Five Things to Know About Laverne Cox’s Hot New Man.”

The website, run by Toronto’s Bonnie Fuller, declared: “Isn’t Jono lucky? For a guy to be captivating enough for someone as amazing as Laverne, you know he has to be special!”

In 2014, Cox told E! she was in a relationship. “I’m seeing someone but we haven’t defined what we’re doing,” she said. “We’re just enjoying each other’s company and having a very good time and laughing together and supporting each other.”

Asked by talk show host Wendy Williams in 2014 if she is in love, Cox replied: “I’m dating and I’m happy. Let’s just say that because we haven’t had that conversation yet.”

Cox, 31, told Williams about the challenges transgender women face in the dating world.

“There are a lot of straight-identified men who are interested in trans women sexually but often don’t want to claim it publicly,” she explained. “And for many years I thought that that’s what I deserved. And today I know that I deserve more than that. I know I deserve to be loved.”

Cox also said “I have dated a lot of Jewish men.”

Freedrix was born Jonathan Friedrichs to Christopher and Rhoda, two Jewish Americans who moved to Vancouver in 1973.

His father is a history professor at UBC and his mother, who taught history at Douglas College in New Westminster for 25 years, succumbed to cancer in 2014.

Freedrix earned his B.A. in History and Comparative Religion from Montreal’s McGill University, where he did Treehouse cartoons for the campus newspaper, The McGill Tribune. He earned his education degrees from Simon Fraser University in Vancouver.

His older sister Ellen is the Health Education Coordinator at a school in Brooklyn and teaches human sexuality at Brooklyn College. She is also editor of a website for LGBT teens and a contributor to Everyday Feminism.

Freedrix worked as a youth crisis counsellor at Walden Safehouse, where he helped young sex workers and teens dealing with substance abuse and violence. At the Vancouver Holocaust Education Centre, he wrote for its newsletter Zachor, gave tours to students, and helped create exhibits.

He started working for the Vancouver School Board and soon took over the acclaimed Killarney Secondary School film program and also taught digital photography and drama. (At RateMyTeacher.com, Friedrichs scores 3.6 out of 5. “This conceited pretty boy is running the film program into the ground,” reads one anonymous comment. “He needs to ease up.”)

Freedrix is currently president of Virtual Stage, a film and theatre company in Vancouver, but calls Brooklyn home.

Freedrix has made several short films, including Parade of Lost Souls, Bloody Mary and the recent Sucklepump.

Cox will soon be spending some time in Freedrix’s native country. She is starring in the Fox TV movie The Rocky Horror Picture Show, which will be made in Toronto from March 14 to April 27.