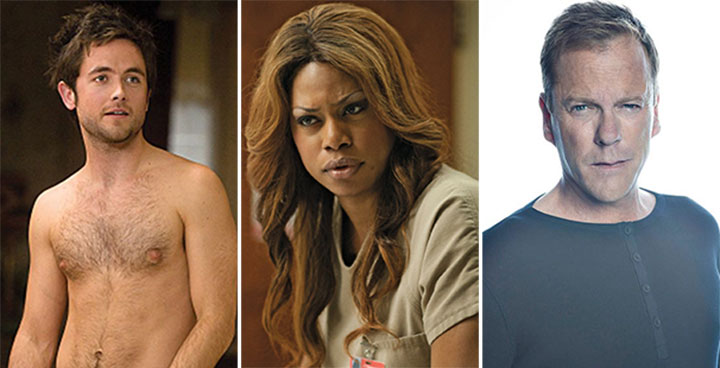 Pop Goes The News — The weak Canadian dollar, lucrative tax incentives, and world-class facilities and crews are attracting a wave of U.S. television productions to Toronto.

More than half a dozen projects for networks like ABC, CBS and Fox are scheduled to start shooting in Southern Ontario before summer.

American Gods, a series based on the 2001 fantasy novel of the same name by Neil Gaiman, is set to start production at Cinespace Studios in Leslieville on March 21.

Ricky Whittle, who stars as Lincoln in the Vancouver-shot The CW series The 100, will play Shadow Moon in the series for U.S. cable channel Starz.

Cameras are scheduled to roll until the end of July.

American Gods is not to be confused with American Gothic, which will be made at Cinespace in Etobicoke.

The Boston-set mystery drama series starring B.C. native Justin Chatwin (Shameless) and Megan Ketch (Jane the Virgin) will shoot from March through June. The 13-episode series is scheduled to air this summer on CBS.

A new series based on the wildly popular Taken film franchise goes into production at Dufferin Gate Studio in mid-March and runs for three months.

The series will focus on a young, unmarried Bryan Mills (the character played by Liam Neeson in the films) and how he learned his “very particular set of skills.” Despite being a prequel to the movies, it will be set in current day.

Casting details for the NBC’s Taken have not yet been announced but Luc Besson, who wrote and produced the Taken trilogy, is on board as executive producer. (The small screen adaptations of Besson’s films La Femme Nikita and The Transporter were also made in Toronto.)

Matt Damon and Ben Affleck are two of the producers behind Incorporated, a series starring Julia Ormond (Mad Men) that will shoot May to September. The series will air on U.S. cable channel Syfy.

The ABC conspiracy drama series Designated Survivor will be made in Toronto from March 7 to Oct. 21.

Kiefer Sutherland returns to the city where he was raised to play a man who is sworn in as president of the U.S. after a deadly attack during the State of the Union speech.

Fox is making an updated version of The Rocky Horror Picture Show at Revival studios from March 14 to April 27.

Tim Curry, who starred in the movie, will appear in the TV version.

U.S. cable channel Reelz is making its mini-series After Camelot in Southern Ontario from May 6 to June 24.

A follow-up to 2011’s acclaimed mini-series The Kennedys — also made in Ontario — this one will see Katie Holmes reprise her role as Jackie Kennedy. She is also an executive producer and will direct one episode.

Ottawa-raised Jon Cassar will return to direct the other three episodes.

Pilot season is underway in Hollywood and among those scheduled to be shot in Toronto is Recon.

Casting info hasn’t been announced yet but the show comes from veteran producers Kevin Williamson and Julie Plec and the pilot was written by Caroline Dries (The Vampire Diaries).

Recon, shooting at Cinespace in Etobicoke, is being considered as a series by Fox. The network has a habit of making pilots in Toronto and then moving production of the series to another city (Fringe and Minority Report ended up in Vancouver).

The Mark Gordon Company, which makes the ABC hit series Quantico in Montreal, will produce the pilot for Conviction in Toronto.

The potential series for ABC follows the daughter of a former U.S. president who leads a team investigating cases where there are suspicions the wrong person was convicted.

Liz Friedlander (The Following) will direct the pilot in March. Casting details are not yet known.

The CW pilot for period drama Transylvania will be shot in Toronto from March 21 to April 8.

Set in the 1880s, it follows a New York woman and a disgraced Scotland Yard detective in the titular region who encounter monsters and villains.

All these TV projects are good news for local crews and others who rely on the industry in Ontario. A number of made-in-Toronto series have ended their runs — including Beauty and the Beast, Defiance, Hannibal, Heroes Reborn, Lost Girl and Rookie Blue.

The Syfy series The Expanse begins shooting its sophomore season in late April at Pinewood Studios, where The CW’s Reign is about to wrap up production of its third season.

The third season of the FX series The Strain wraps at the end of April and the second season of Hallmark Channel’s The Good Witch finished this week.

Season two of Killjoys, a Canadian series that airs on Syfy, is scheduled to complete filming in mid-April. Production of the Canadian series The Code, starring Jason Priestley, is almost done.

Cameras roll in April on a sixth season of Suits.

This story has been updated since it was first posted.