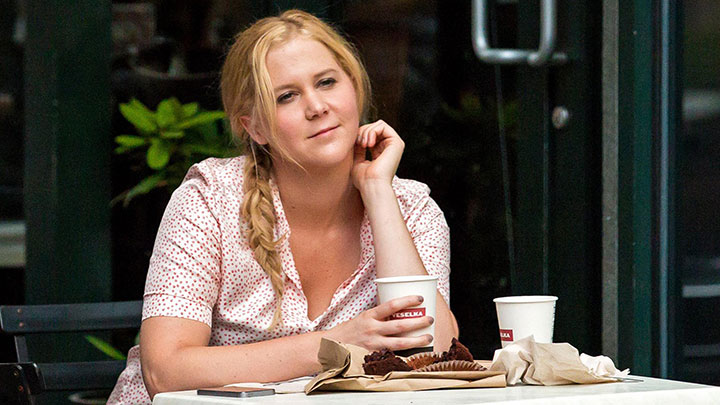 This post has been updated with new developments. Contrary to some reports, Pop Goes The News was first to report on the allegations on Jan. 19 at 1:34 p.m.

Pop Goes The News — Amy Schumer took to Twitter and the airwaves on Wednesday to defend herself against allegations that she stole material from three veteran comedians.

The PR move came a day after comics Kathleen Madigan, Wendy Liebman and Tammy Pescatelli seemed to back off from the allegations against Schumer.

“I’m getting accused of stealing jokes and I wanted to come and talk to you about it and clear my name because I would never ever do that and never have,” Schumer told fellow comedian Jim Norton on his radio show.

“I would never, ever do that, and I never have. I’m so careful. I will literally take a polygraph. And I just would never do that.

“That would be so stupid for me to do that.”

On my life, I have never and would never steal a joke.

The controversy erupted on Monday when Madigan, Liebman and Pescatelli used social media on Monday to call out the Trainwreck star.

Hours after Pop Goes The News was the first to report on the allegations against Schumer, Madigan deleted her tweets without explanation. (She also blocked this blog’s author.)

Madigan had vowed to post a split-screen video with examples of “the disgusting amount of stealing.” She tweeted: “Game over.”

In response to one from comedian Chuck Martin, Madigan wrote: “Get ready for a shitstorm.” (She later deleted this tweet, too.) 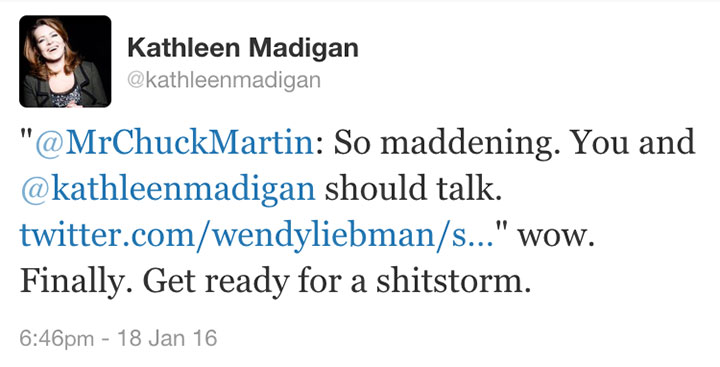 While Madigan never referred to Schumer specifically, Schumer has been accused of ripping off one of Madigan’s comedy bits from several years ago.

Referring to Oprah Winfrey’s ongoing battle with weight, Madigan joked: “You have enough money to pay a man to stand there and literally slap shit out of your hand before you put it into your mouth.

“You could hire a full-time food slapper.”

In 2013, an episode of Inside Amy Schumer included a parody commercial for “Slap Chef.”

“First, one of Slap Chef’s world-class chefs makes you one of their signature dishes,” the announcer says. “Then, before you can say ‘Slap Chef,’ they knock it out of your stupid mouth.”

BELOW: Watch the “Slap Chef” parody on Inside Amy Schumer.

Also taking aim at Schumer on Monday was Liebman, who tweeted that Schumer did “one of my best jokes on her HBO special.”

She later deleted the tweet, then insisted: “It’s all good.” 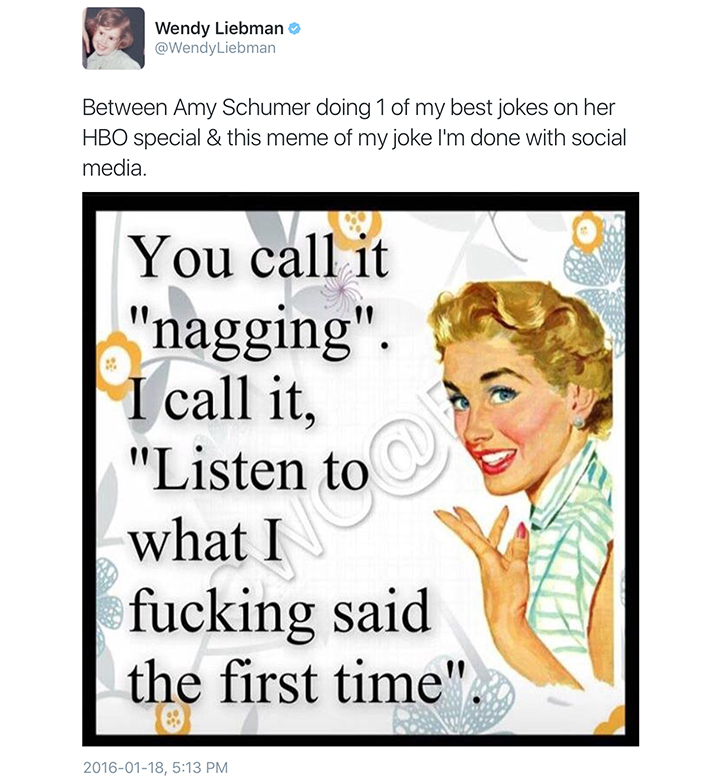 Liebman had been referring to this line from her act: “Maybe I’m old fashioned but I like it when the guy pays… for sex.”

In her HBO special last year, Schumer said: “I’m very old school. Like, I think the guy should always pay on the first date… for sex.”

I never said @amyschumer stole my joke.I just said it was the same.It's possible we both wrote it.I just wanted you to know I wrote it 1st.

On Wednesday, Liebman tweeted: “I think both @amyschumer and I like it when a man pays…for sex. #greatminds #parallelthinking”

In a statement to the Hollywood Reporter, she elaborated: “I’m a huge Amy Schumer fan. She’s always been generous telling the press that I’m one of her influences. And she’s been so nice to me in person. So I want to believe that someone sold her my joke.

“I doubt she intentionally took it but I wanted to at least claim what was originally mine.”

CHECK THIS OUT: Artist posts ‘dick’ cartoon ahead of Rene Angelil funeral

Pescatelli had first gone on Twitter to support Liebman. Referring to Schumer, she wrote: “What has always been amazing to me is that she purports to be a feminist and yet only steals from other female comedians,” wrote Pescatelli.

“If we call her on it we are ‘jealous’ or career shamed. Be successful. WE want you to do well, just do it will your own material.

“BTW she blocked me.”

On Tuesday afternoon, those tweets were gone. Pescatelli cryptically tweeted: “I misspoke. I meant Miss Philippines.”

BELOW: Two of the tweets Pescatelli deleted.

Pescatelli had accused Schumer of copying one of her lines in the movie Trainwreck (which Schumer wrote).

“You dress him like that so no one else wants to have sex with him? That’s cool,” Schumer’s character says in the movie.

In a 2006 comedy special, Pescatelli joked: “Men, if we love you, we dress you for other women too — that’s why we dress you stupid. Because we want another woman to look at you and go, ‘He’s cute but I can’t fix all of this’. Who do you think invented the Hawaiian shirt?”

On Twitter, Pescatelli alleged there are many more examples “but no one listens.”

She added: “At least Cosby knocked his victims out b4 he raped them.”

When a follower opined that he doubted Schumer is “consciously looking up” material from the three women, Pescatelli replied: “She didn’t have to look it up. Everything she has used was from the ‘era’ she opened for all of us.”

A video comparing Schumer’s jokes with those by Pescatelli, Liebman and Madigan was posted online Tuesday. (It was later removed due to a copyright claim.)

Schumer said Wednesday she believes Pescatelli is to blame for the controversy.

“Both Kathleen and Wendy know me and they don’t believe I would do that,” she said on Norton’s radio show. “I think this is Tammy’s trying to get something going. I think [Tammy] is upset I blocked her on Twitter a couple years ago because she was unkind to my best friend, Rachel Feinstein, and I didn’t like how she treated Rachel.

“I don’t think she’s got much going on, this is my guess. I think people get upset by success.”

On Twitter, Pescatelli said Wednesday that Schumer’s comment about Feinstein “couldn’t be further from the truth” and denied she was the antagonist.

“I was the last to post of 3 women — albeit the loudest,” she tweeted.

“I appreciate the credit of being a mastermind, but I am a hard working wife, mom & comic. I barely have time 2 start my car.”

Last year, Schumer came under fire for seemingly putting her own spin on material performed by stand-up Patrice O’Neal at a Just For Laughs show in Montréal nearly a decade earlier.

O’Neal, who died in 2011, had riffed about various sex acts with names like “Gorilla Master,” “Darth Vader” and “Poltergeist.”

Schumer closed her HBO special, taped in New York, with a rundown of the same sex acts — albeit with different names.

On social media, fans of O’Neal accused Schumer of plagiarism.

The comedian fired back on Twitter: “I have never seen that Patrice bit but I will watch today. I love and miss him.”

Schumer told TMZ she would “never take anyone’s joke” and suggested the allegations were absurd.

“The thought that I would maybe see those jokes and then go, ‘ooh i like those, I’m going to close my HBO special with them,’ is crazy,” she said.

Some of her fellow comics agreed.

Jim Norton pointed out O’Neal didn’t come up with the sex acts he was describing. “People doing similar bits has been happening in comedy for as long as people have been telling jokes,” he wrote in a statement shared on Facebook.

“We understand the difference between two people doing a similar bit and one person seeing the bit and stealing it.”

Colin Quinn tweeted that “a premise is not a joke” and said O’Neal would agree “a premise thats part of popular culture is not anybody’s.”

This post has been updated since it was first published on Tuesday.