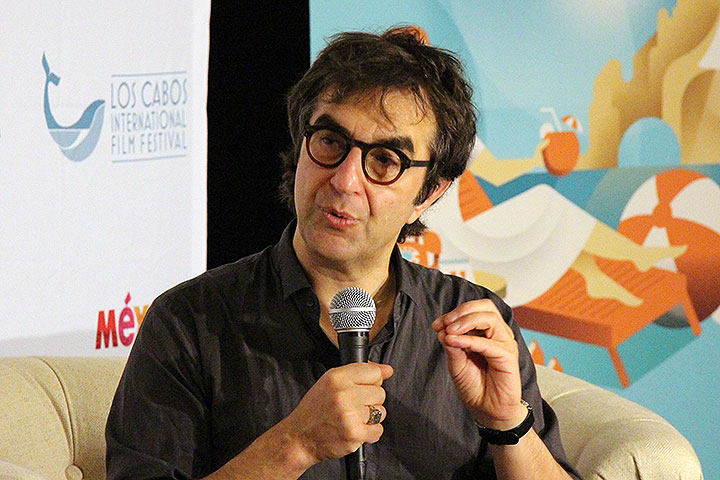 Pop Goes The News — Atom Egoyan pauses for several seconds when asked about the current crop of Canadian filmmakers making movies that are being seen and talked about around the world.

The 55-year-old writer-director is in a club that includes Jean-Marc Vallée, Denis Villeneuve and newcomer Xavier Dolan.

At least six of his films, including last year’s The Captive, have been nominated for the Palme d’Or at Cannes and his 1997 film The Sweet Hereafter earned him a pair of Oscar nominations.

“It’s funny, we have a very interesting tradition,” Egoyan finally offers. “Up until this point the filmmakers who wanted to work in a more commercial medium are the ones who made the decision early on and left the country — the Norman Jewisons, the Arthur Hillers, the James Camerons.

“We are in this interesting phase — and I think it started with David Cronenberg — that you can stay in Canada and you can still explore other possibilities.”

Egoyan points out that Vallée and Villeneuve are doing post-production of their films in their native Montreal. “They’re going elsewhere to shoot but then they bring it back home. They don’t need to leave.

“That’s different. As these films and these reputations make it clear that we don’t have to leave the country in order to explore this other way of making films, then it becomes a lot more natural.”

Speaking to Pop Goes The News on Thursday in Cabo San Lucas, where his latest film Remember is screening at the Los Cabos International Film Festival, Egoyan says Canada has hosted filmmakers from all over the world so it’s only logical the country’s own should be able to go beyond its borders.

“It should be a two-way street. We should be able to go back and forth and be able to migrate,” he says. “This should just be something we take for granted.”

“You go, why does it take so long? But these barriers are broken now,” Egoyan says. “There shouldn’t be anything special about the fact that we’re staying in Canada or that we’re using Canada as Canada.

“It’s just fascinating that these early directors felt the need to move.”

While Egoyan agrees that foreign productions — including big-budget Hollywood films — pump a lot of money into the Canadian film industry, he notes that they have made it more challenging for directors like him to work at home.

“It’s very busy and it’s more difficult to bring together a crew,” he says. “The equipment is so overbooked and overextended. Finding studio space in Toronto is challenging.”

Egoyan says that Chloe was one of the first films to shoot inside Pinewood Toronto Studios. “I remember walking around and thinking, wow, is this going to work? And now it’s impossible to get that space.

“This is healthy. This is good. But it is frustrating.” 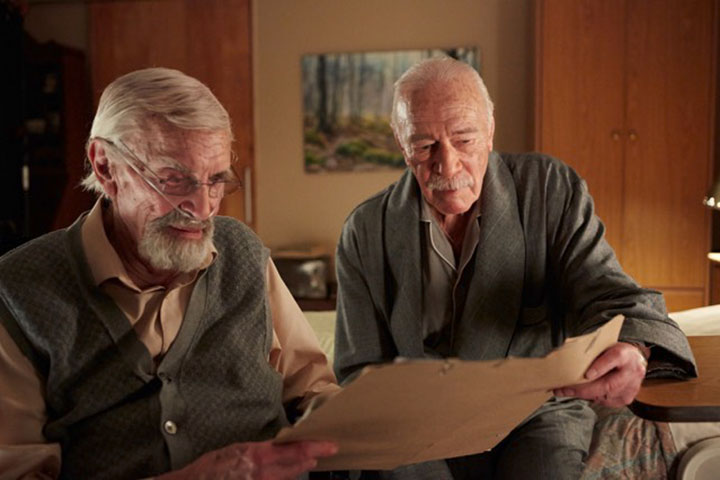 Remember stars Toronto-born Christopher Plummer as a man living with dementia who, using instructions written down by a fellow nursing home resident (Martin Landau), sets out to kill the man who killed his family at Auschwitz.

Set in the U.S., Egoyan made the film in Southern Ontario using a script from first-time screenwriter Benjamin August. (The director believes Remember will be one of the last contemporary movies about Holocaust survivors.)

The film belongs to Plummer, who is in every scene, but there are memorable performances by Landau, Bruno Ganz, Jürgen Prochnow and Dean Norris. The latter, playing a neo-Nazi, has a scene with Plummer that is difficult to watch.

“We rehearsed that. We were able to kind of choreograph it because we knew you couldn’t keep summoning those emotions,” recalls Egoyan, a Breaking Bad fan who met Norris at a film festival in Italy and pictured him in the role.

“There is something so empathetic about [his character]. I knew that Dean could bring that nuance to it.” 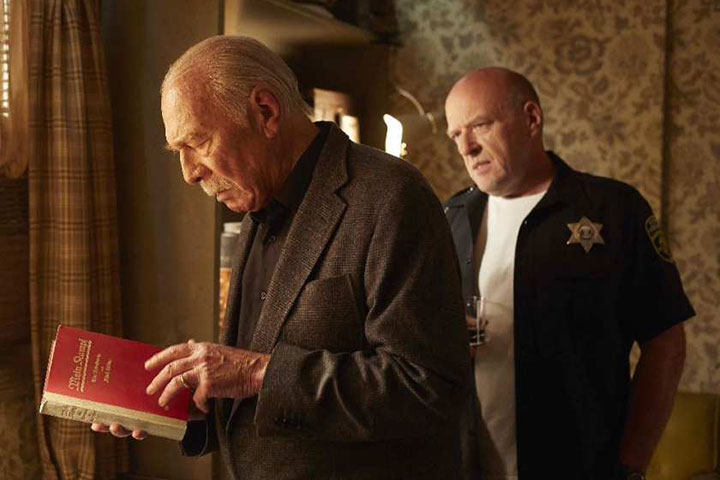 Remember is infused with Holocaust symbolism — a barking German Shepherd, a journey by train, wailing sirens.

“Those are things that I kind of visualized,” explains Egoyan. “They’re inspired by the script, obviously.

“The siren is a weird one because we were looking for locations and we found this place near a quarry [between Burlington and Hamilton] and that is the actual sound of the siren that they use to signal there’s an explosion. I heard it and I was like ‘this is just too weird’ so we had the sound person record it and it ended up being a huge part of the soundtrack.”

The movie ends with a twist (which answers several questions keen-eyed viewers may have had) that Egoyan hopes people who see the movie won’t give away.

Remember had a theatrical release in Canada last month and will hit cinemas in the U.S. in January — but Egoyan knows many more people will experience it via streaming services. He’s okay with this, given that the film is small in scale and linear.

“It’s funny because The Captive ended up doing extraordinary well on iTunes and Amazon Prime. In the U.S. that’s how a lot of people saw the film and yet it’s shot in scope and shot for the big screen,” he says.

“It’s interesting because I look at the responses on Amazon Prime and imdb.com and people don’t feel frustrated.”

As a filmmaker, Egoyan struggles with the ways movies are consumed these days.

“I don’t know how to negotiate that because some people have large-screen TVs at home and they’re watching it that way but then you are aware that some people are watching it on iPhones,” he explains. “I’m trying to figure that out.”

He’s certain of one thing, though. “I’m not going to change my technique to accommodate the form. That becomes really dangerous.”

Egoyan is also not keen to go back to directing TV, although he admits there’s a project he’s considering that “would be more of a limited series than a feature.”

“I’m embarrassed to admit this but I did the pilot of the Friday the 13th TV series so I had this early contact with television,” says Egoyan, who also helmed episodes of Alfred Hitchcock Presents and The Twilight Zone in the late ‘80s. “but it was always just as a way of paying for my feature films, so I could produce my own work.”

He says his career could have gone in an entirely different direction when HBO optioned his 1991 film The Adjuster for a series.

“I did the whole contract, I gave the rights. At the time I said creatively I don’t want anything to do with it,” recalls Egoyan. “So they made a pilot, which didn’t work, but I look back at it now and I go, ‘That would have been very interesting.’

“To do this film about a bisexual insurance adjuster working with these different clients, putting them up in a motel, and of course there could have been an episodic aspect to it and it could have been this very unusual series at that time, in the early ‘90s right after Twin Peaks.”

Egoyan says he was consumed with his feature films like Exotica and The Sweet Hereafter at the time so he doesn’t have any regrets about not adapting The Adjuster for TV.

“And I have to admit I did not take it seriously because I felt I had already made the film — why would I go back into this world? But now, it’s interesting,” he admits. “I would have pursued it as a series because it’s a good idea. It has its own episodic quality — you can see it in the film. You can see how the branches would grow, as they have to do in a good TV series.”

Egoyan also believes he’s not built for the pace of episodic television, which requires “a long distance runner.”

He explains: “You are dedicating your life to it. A feature film, yes, it’s very stressful but you’re shooting for maybe five or six weeks. Television production, that process is going on all the time.

“Also, working in a room with other writers. The politics of that would be completely… It’s exciting, I mean, I love this idea that you are able to generate ideas with other people… but it’s completely outside of my experience.”

While Egoyan’s films typically earn acclaim and awards, they rarely earn a lot of money. Still, he insists he has little interest in signing on to make a big studio blockbuster.

“You have to think that you’d do a good job with it and you’d be the right person to do it,” he explains, “and I just think there are other filmmakers who are more disposed towards that type of film.

“I enjoy that sort of film but whether or not I could actually think that I would do a great job… when it comes to big-tent films, I’m just not designed for that, probably.”

BELOW: Watch the trailer for Remember.

Pop Goes The News is a guest of the Los Cabos International Film Festival.