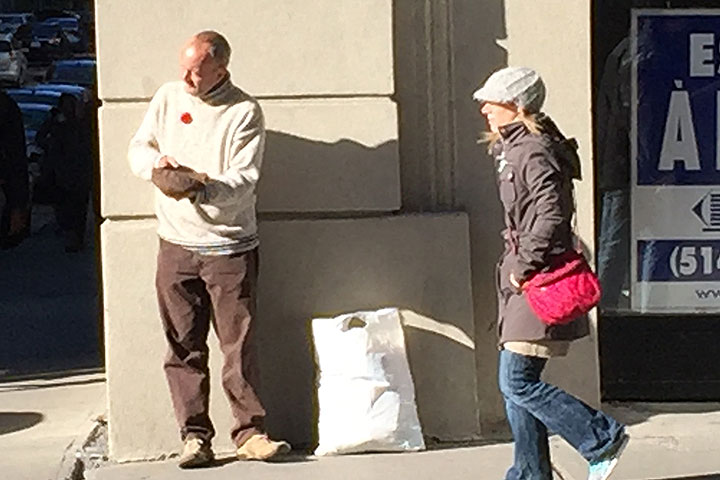 Pop Goes The News — A man was spotted Sunday selling poppies out of a hat on a street corner in downtown Montreal.

The unidentified man was seen pocketing cash that passersby on Sainte-Catherine Street at Aylmer Street gave him in exchange for a poppy — the symbol of Remembrance Day.

Confronted about whether he was collecting donations on behalf of the Royal Canadian Legion, the man said nothing as he put the hat full of poppies into a plastic bag and walked inside St. James United Church.

He also declined to say how he obtained the poppies.

The annual poppy campaign is a key fundraising initiative for the Legion, which supports veterans across Canada.

Bill Maxwell of the Legion told Pop Goes The News that “all donations must be received by a Legion member who would be in uniform.”

The Legion has held the copyright on the poppy symbol in Canada since 1948 to protect the poppy from being used “for commercial or personal gain.”

According to the official poppy campaign manual published by the Legion, canvassers must use collection boxes that are sealed and registered. Donations are deposited into a Poppy Trust Fund account. 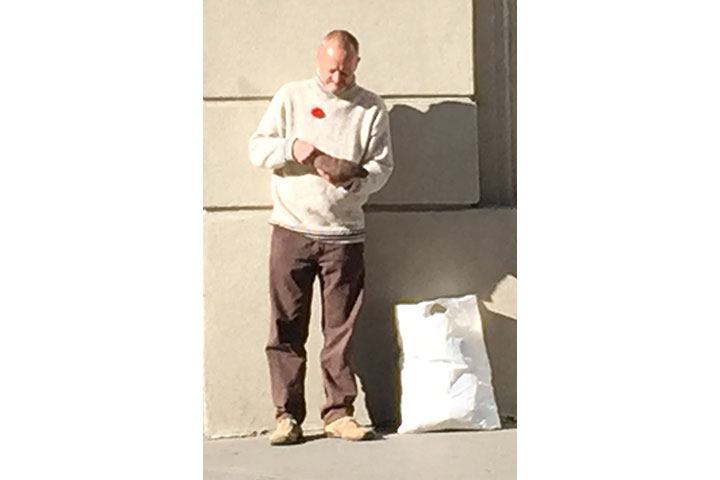 The poppies are made in Ottawa using polyethylene from the U.S. and assembled by a private company in Toronto as well as by inmates at minimum-security correctional institutions in Alberta, Saskatchewan and Manitoba.

An estimated 20 million poppies are distributed in the weeks leading up to Remembrance Day.

While there are reports of people selling poppies for personal gain every year, the bigger problem is thefts of donation boxes at stores and restaurants.

And, earlier this month, a man entered a Brantford, Ont. store claiming to be collecting donations from a poppy box. A skeptical clerk called the Legion and was told no one had been sent. Police are investigating.