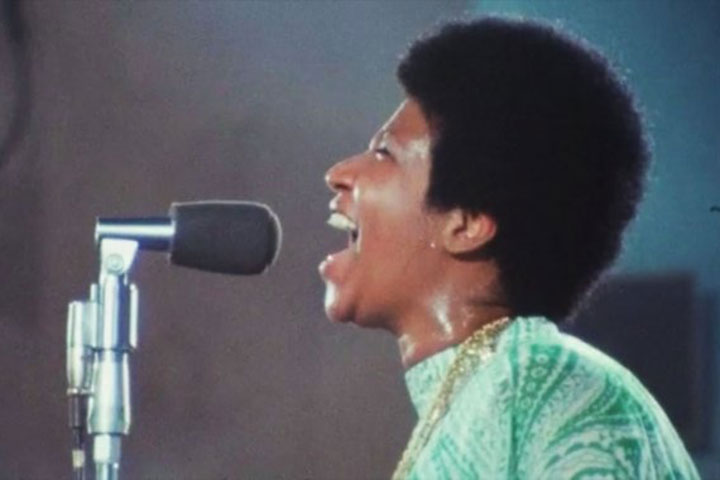 Pop Goes The News — Lawyers representing Aretha Franklin said Friday they will ask an Ontario judge to block the Toronto International Film Festival from screening a documentary about the making of her 1972 live gospel album.

UPDATE (09/08) – TIFF announced producers of Amazing Grace have withdrawn the film from the festival.

The 73-year-old Queen of Soul wants TIFF to pull the plug on showings of Amazing Grace scheduled for Sept. 10, 12 and 20.

On Friday, Franklin’s lawyers convinced a judge in Colorado to issue an injunction against the Telluride Film Festival, where Amazing Grace was set to premiere on Friday night (and screen again on Saturday and Sunday).

They said the movie violates Franklin’s rights to her name and likeness and invaded her privacy.  The singer had agreed to be filmed but producers needed her consent to use the footage commercially.

In a three-page ruling, U.S. District Judge John Kane said producer Alan Elliott — who purchased the footage from Warner Bros. — did not have Franklin’s permission to release the film. Kane also ruled the film violated a federal anti-bootlegging statute.

He granted an order against screening the film for at least 14 days.

The judge’s ruling is not enforceable in Canada, though.

Fred Fresard, a Detroit lawyer representing the singer, told The Hollywood Reporter on Friday they will seek a similar injunction against TIFF.

Amazing Grace is an 87-minute doc about the recording of Franklin’s album of the same name at the New Missionary Baptist Church in Los Angeles.

Franklin was backed by the Southern California Community Choir.

The film was shot by the late Sydney Pollack over two days in January 1972.

Among those in the church were Mick Jagger and Charlie Watts of The Rolling Stones.

The footage was shelved for decades, though, because Pollack had failed to sync the sound. After his death from cancer in 2008, the film was completed and scheduled for a 2011 release.

Franklin sued to block the release (although she reportedly told the Detroit Free Press she “loves” the movie) and producers agreed to seek her permission prior to distributing the film.

UPDATE (09/07) – The Chicago International Film Festival, taking place in October, announced Sunday it has pulled Amazing Grace from its line-up.

BELOW: Watch the trailer for Amazing Grace.