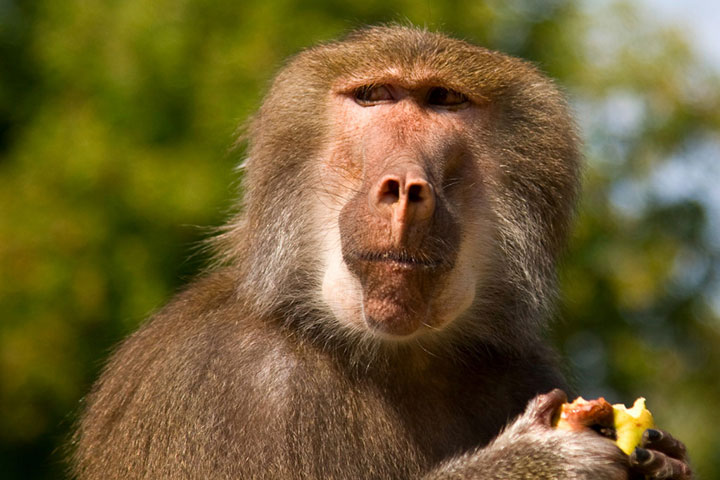 Michael Hackenberger of the Bowmanville Zoo was forcing a baboon on a leash to ride on the back of a miniature horse during a segment for BT on City.

When the primate named Austin jumped off, Hackenberger said: “No, no, no. Fuck you, cocksucker. Get up!”

Hackenberger, who had just been interviewed by BT personality Jennifer Valentyne, was wearing a microphone — so viewers heard every word.

Valentyne quickly interjected: “Bowmanville is open until when, Michael?” before ending the segment.

What happened today was unacceptable and does not reflect our values at BT. As a result, we will no longer be visiting the Bowmanville Zoo.

The moment was shared on YouTube and quickly went viral. While some people took offence to the language used, most slammed the zoo for forcing wild animals to perform.

@Bowmanville_Zoo I can only imagine how you treat your animals when no one is looking! #BoycottBowmanvilleZoo #ShameOnYou

Any "Zoo" where the animals have to perform tricks is not a zoo. It's a circus. They're infamous for being cruel to animals #BowmanvilleZoo

If that's how @Bowmanville_Zoo treats their animals on LIVE TV, I'm cringing about what happens behind closed doors. Terrible @BTtoronto.

.@BTtoronto language during @Bowmanville_Zoo segment really showed love for their animals. Perhaps you should support sanctuaries instead?

Wild animals should not be put on leashes to do tricks for our amusement.

Frankish added that the show “failed animals today. No excuses.” He urged people to “turn this into a positive” by tweeting animal organizations worth supporting.

Radhika Subramanyan and Kathy Fischer of Kitchener, Ont. started an online petition calling on government officials to shut the zoo down.

“This illustrates the poor quality of care and the atmosphere of abuse that surround the zoo,” it reads, “and makes one truly wonder what happens behind closed doors when this type of behavior happens on live television.”

Britanny Peet of animal rights group PETA called the incident on BT “a window into the world that animals inhabit behind the scenes in circuses, at roadside zoos, and at other such outfits — where whips and beatings often follow threats and cursing.”

In her statement, Peet urged people to “steer clear” of the zoo.

Hackenberger downplayed the incident in an interview with Clarington This Week and complained about the mob mentality on social media.

But late Friday, he issued a statement apologizing for the language he used in “exasperation.”

Hackenberger added: “I love my animals and continue to try to do my best to make a difference in the world.”

Toronto Sun columnist Lorrie Goldstein expressed surprise at the reaction. He tweeted: “Oh, for gawd’s sake people, seriously? THIS is what we get outraged at now?”

BELOW: Watch the moment on Breakfast Television.